Enjoy a day of FREE, fun activities for all ages, live music, and lite bites and refreshments donated by neighborhood businesses. Give back by bringing canned soups, vegetables and beans to benefit The Bowery Mission‘s Thanksgiving Meal.

Lite Bites and Refreshments Donated By

This FREE event is open to the public.

This year’s Harvest Festival is the culmination of Elizabeth Street Garden: Neighborhood LIVING Room, a neighborhood-led initiative that invites our larger community to engage with the Garden as an outdoor living room and shared backyard. The season-long initiative was funded in part with a generous grant from Citizens Committee for New York City.

If you would like to volunteer to help, email emily@elizabethstreetgarden.org.

Get your stretch on with instructors provided by our neighborhood lululemon athletica. Please bring your own mat. Open to the public and FREE.

No experience necessary. Both adults and kids are welcome. Open to the public and FREE.

The Daffodil Project was founded in 2001 as a living memorial to Sept. 11. With nearly 5 million free bulbs planted citywide by New Yorkers, it is one of the largest volunteer efforts in the city’s history.

Garden Meeting — All Are Welcome!

Invite the Mayor to Visit the Garden

Join us as we show the mayor how much the Garden means to us. (Let’s meet at the Peter Cooper statue.)

This is not a protest, but an invitation to the mayor to visit the Garden made more powerful by your presence!

Mayor de Blasio said he would “happily” visit Elizabeth Street Garden when questioned by a Garden supporter on WNYC’s The Brian Lehrer Show. Help us re-extend the invitation in front of the Foundation Building at Cooper Union where the mayor is scheduled to give a major speech at 11 a.m. in the Great Hall.

The brilliantly colored leaves of our pear trees are among the last of the season to fall. Lend a hand with neighbors to keep leaves in the Garden. Let’s rake, shred and mulch them into beds in preparation of colder months come.

Both adults and kids are welcome to lend a hand (and play in the leaves). No experience necessary.

Garden Meeting — All Are Welcome!

It’s time to sound the alarm! Join us as we “wake up” Council Member Margaret Chin and Mayor Bill de Blasio’s administration. Tell them to stop ignoring our community. Tell them that we will not rest until our beloved park is saved.

By subway: R/W to City Hall or 4/5/6 to Brooklyn Bridge–City Hall

Enjoy live seasonal music in the Garden and celebrate the coming of lighter days.

Join us to help expand Garden support and plan for 2017 grant applications and programming.

Join us to help expand Garden support and plan 2017 programming.

Let’s Wake Up the Mayor! Take the subway to his gym and tell him why
breaking the Garden in half will break our community. The Garden is
where everyone from children to seniors joins together for yoga, tai chi,
movies and community. Bring a sign and bring a friend. Rain or shine.

Help hang lanterns to celebrate the traditional end of the Chinese New Year period. Lanterns will remain illuminated throughout the weekend. Enjoy them day and night.

We all need to spread the love right now. Come to the Garden to get your heart pumping!

Rivington House is yet another lost opportunity for affordable senior housing. Instead, de Blasio and Chin want to destroy Elizabeth Street Garden, our much loved neighborhood park.

Do you have programming ideas for 2017? Bring them Sunday. Submit them online. Events planned by March 15 will be promoted in a press release introducing the upcoming season.

Open to the public and free.

Celebrate the official kickoff of the community gardening season in New York City!

The day will be packed with 30-plus workshops on garden-related topics including: food systems education, kids’ activities, vegetable growing techniques and designing your community garden for the present and future.

Why park cars at 2 Howard St.? This site can be redeveloped for affordable housing, community use, and even some parking.

Meet at Howard and Lafayette streets (under the scaffolding, RAIN OR SHINE), bring signs and wear green.

Join Public Space Party for a bike ride to celebrate Arbor Day, Earth Day and spring. Meet at Elizabeth Street Garden and ride through the Lower East Side.  Link to Facebook event.

Who wins? Everyone — more senior housing and a beautiful park! 388 Hudson St. can provide five times as much affordable housing than can be built by destroying Elizabeth Street Garden.

Monthly Friends Meeting — All Are Welcome!

Let’s go to the movies! Friends presents an evening of films and digital shorts inspired by the stories that play out on the streets of New York City. 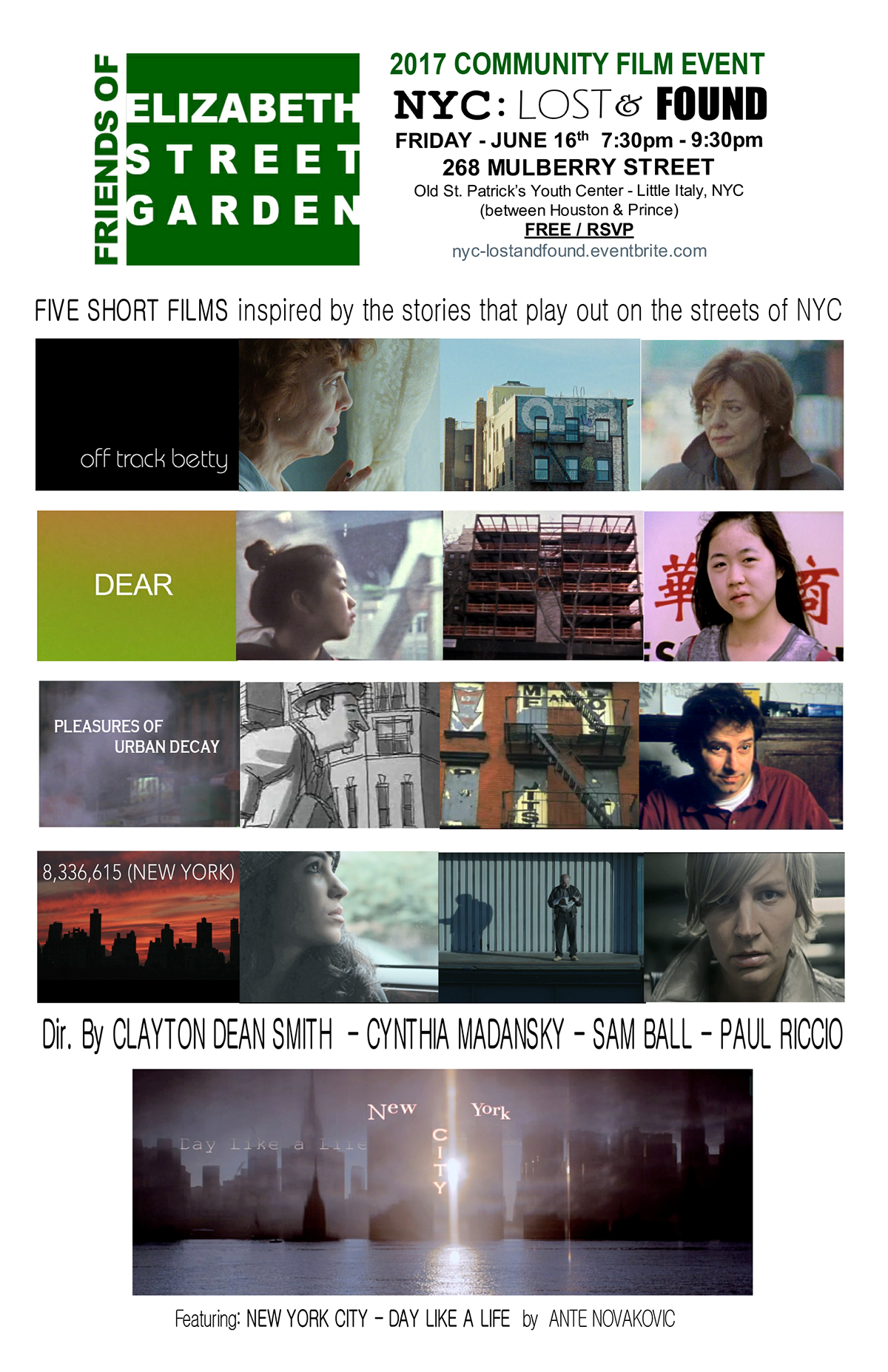 Films to be screened include:

OFF TRACK BETTY (2016) Narrative Short / 16mm / 19mins / Dir. by Clayton Dean Smith
Past merges with the present when a street photographer compels a longtime apartment dweller to confront the changes to a neighborhood she no longer recognizes.   Filmed in 16mm on the streets of the Lower East Side – Off Track Betty was one of the last films to be processed in NYC. Winner of the 2016 Brooklyn Film Festival Audience Award Best Short.

DEAR (2014) Experimental hybrid / Super 8 / 15mins / Dir. by Cynthia Madansky
An intimate look at the friendship between two teenage girls as they navigate the streets of Chinatown while facing the threat of displacement due to gentrification.  Featured in MoMA’s “Giving Voice” Film Program. Cinematography by Steve Cossman founder / creator Mono No Aware Film Festival in Brooklyn, NY.

PLEASURES of URBAN DECAY (1998) Documentary / 16mm / 15mins / Dir. by Samuel Ball
Revisit the Lower East Side of the late 90’s in this portrait documentary of Ben Katchor, creator of the last great comic strip which chronicles the urban adventures of Julius Knipl, a real estate photographer whose camera finds poignant stories in the most subtle details of the city.         This rare documentary remains as relevant today as it did when it first premiered at the 2000 Sundance Film Festival.  Eerily prophetic, Sam Ball’s noir-style camera work captures nostalgic tableaus of a lost urban landscape.

Paul Riccio’s 8,336,615 (NEW YORK), a visual monologue that explores the paradox of being lonely in a city of over eight million people by finding universal struggles in everyday moments of city life.

Ante Novakovic’s NEW YORK CITY – DAY LIKE A LIFE spans the city from sunbreak to sunset and pans through the city streets with the viewpoint only a true New Yorker could provide. Stunning slow-motion cinematography portrays a city where the daily rituals of pedestrians are as monumental as the skyscrapers that surround them.

Friends of the Garden Meeting — All Are Welcome!

Location:  Storefront at 230 Elizabeth St., between Prince and Houston streets.

Friends of the Garden Meeting — All Are Welcome!

Press Conference to Unite and Fight!