To fund this legal work, Friends has raised nearly $80,000 toward our $100,000 legal defense fund goal. Your contribution will directly fund legal fees to save our beloved Elizabeth Street Garden from permanent destruction.

Assemblymembers Deborah Glick and Yuh-Line Niou, who represent the constituents where the Garden is located as well as the adjoining district, along with Little Italy and SoHo residents, will serve as co-plaintiffs. The suit claims the city’s effort to develop Elizabeth Street Garden into a seven-story mixed-use building is unlawful:

Our community is starved for open space, and the 20,000-square-foot park is open to the public year-round, offering more than 200 free public events annually and attracting more than 100,000 visitors each year. (Read more….)

Friends has retained Michael Gruen, an experienced land use attorney with a proven track record litigating against New York City and state governmental entities. Gruen has prepared a strong legal case based on the Garden’s history and environment law. (Read more….)

*Please note that our organization is Friends of Elizabeth Street Garden.

If you have questions, want to help further or would like to introduce Friends to potential donors, please contact Emily Hellstrom at [email protected].

Please spread the word to your friends and neighbors.

How the City’s Plan Will Destroy the Garden

Don’t be fooled by pretty renderings…. Once the bulldozers come, the developers will replace our green oasis with a tiny, shadow-filled, privately-owned opened space. 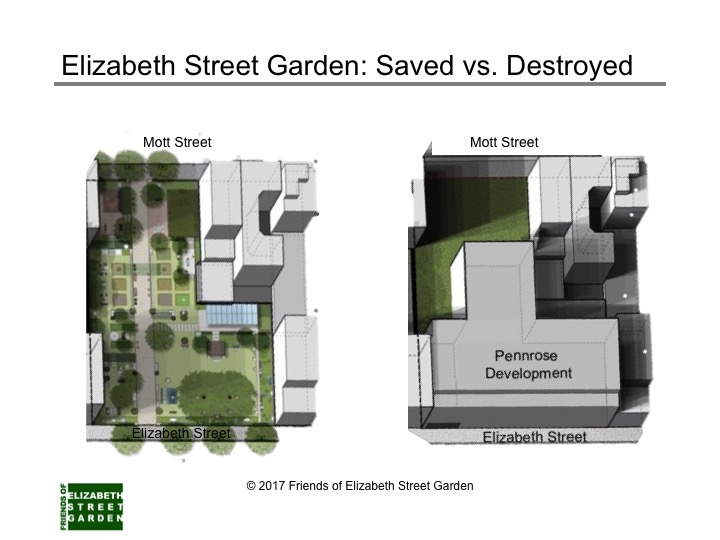