Friends of Elizabeth Street Garden is delighted to present a FREE community screening of two documentaries that connect Little Italy’s past and present — Mulberry (2016) and Hey Vinny (2000), with introductions by Mulberry director Paul Stone and Hey Vinny actor Vinny Vella.

The Garden will remain open through the evening. Come early, cool down, bring a blanket and cozy up! Seating will be reserved for seniors.

Parental guidance advised as some material may not be suitable for children. 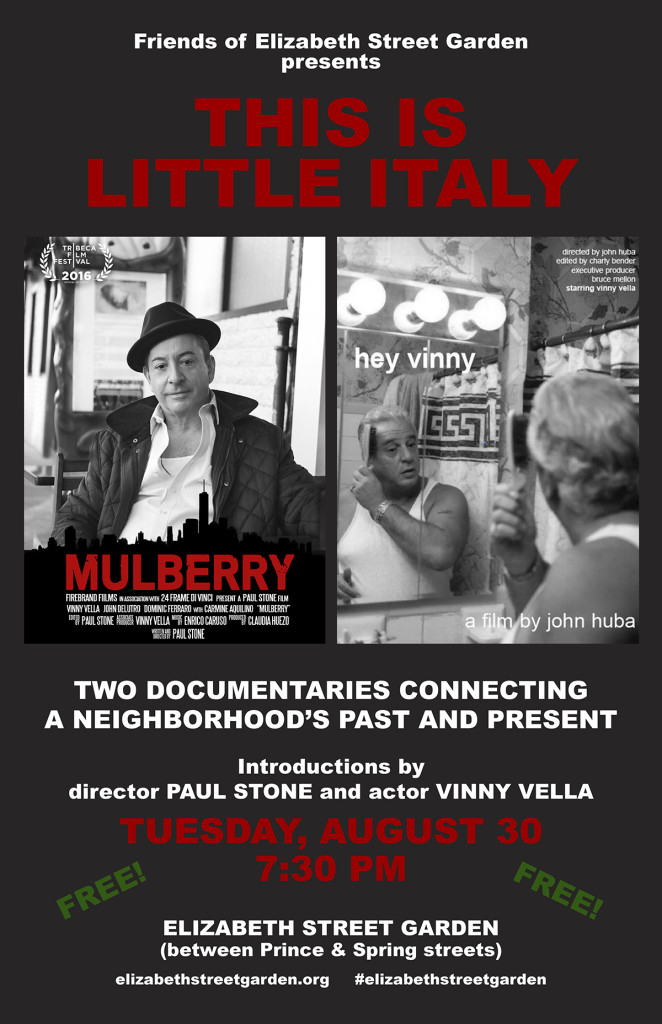 Mulberry, a cinematic portrait of Little Italy, explores how a working class neighborhood of tenement buildings transformed into the third most expensive ZIP code in the United States. Part funny, part sad, the film investigates how gentrification and rent control are affecting the neighborhood’s long-term residents. Will New York City lose another cultural touchstone to the forces of greed?

Hey Vinny is an engaging and vibrant documentary about the life and times of Vinny Vella, a charismatic and lovable character known as the mayor of Elizabeth Street in New York’s Little Italy. Vella recants wild, improbable stories of growing up on the streets of Greenwich Village. Tales range from stealing his first police car at age 11 to being accused of stealing King Tut’s ring from the Metropolitan Museum of Art. Hey Vinny explores the love stories between Vella, his family and the city where he grew up.

Why is the Garden is important to our community? Neighbors and local business owners tell us why.